Many steps have already been taken to establish a Theravada Buddhist Monastery in Portugal.

Maria Ferreira da Silva, ordained as an Anagarikā in 1988, felt that it would be of great benefit to have a monastery in the Ajahn Chah Forest Tradition in Portugal. Although she did not continue to pursue her monastic life, her idea of establishing a monastery in Portugal continued and after some years, Maria invited Luang Pô Sumedho to visit Portugal.

In 2006, Luang Pô Sumedho paid the first of five visits to Portugal. On that occasion Maria asked if Luang Pô Sumedho would support the existence of a monastery in Portugal. As there were already Portuguese monks in the Amaravati Buddhist Monastery in England, Luang Pô gave his assent. He advised that before starting the project, all the legal requirements be met and asked Ajahn Vajiro to help with this task.

While searching for property to build the monastery on, suitable forested land was found near Ericeira. Luang Pô Sumedho visited this property first time in 2010. 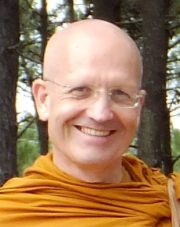 Tahn Ajahn arrived in Lisboa in 2012, accompanied by Ajahn Subbhado and Ajahn Kancano, two bhikkhus in the Ajahn Chah tradition. They were also invited to come to live in Portugal. Then, in 2013 the community moved to a location not far from Ericeira, a beautiful coastal town 40 km from Lisboa, easily accessible by public transport.

Ajahn Dhammiko and Tahn Appamado formed the Portuguese resident monastic community, which now also includes the Portuguese Bhikkhu Mandali, who was ordained on the new land on 18 September 2016. The monks have been very well received by the local community. They perform their alms round every day. Many people come to the monastery to make offerings and meditate with the monks.

On 28 January 2015, the 10 hectare property, which was visited by Luang Pô Sumedho in 2010, was finally purchased with generous donations. This property, on which the new monastery is now taking shape, is located a few minutes from where the monks are currently living. Luang Pô Sumedho, the first western disciple of Ajahn Chah and teacher of Ajahn Vajiro, gave permission to call the monastery, ‘Sumedhārāma’.

Since the purchase of the land, monks and lay people have been taking care of the forest on the land with the aim to restore the native flora once destroyed in some areas due to agriculture and the intensive cultivation of eucalyptus trees. The first step taken to regenerate the land, was to remove all the non-native species and plant thousands of seeds, trees and autochthonous shrubs and bushes. Our intention is – to bring back the land as much as possible to its original ecological balance, to regain its natural sustainable capacity, where indigenous species like the oak, including the cork oak, may again predominate.

Recently, the plans to build the monastery were approved by the local Town Authorities – Câmara Municipal de Mafra. The project consists of eight phases, the first being the most expensive, but at the same time the one that will allow the monks to move out of their present rented residence in Pinhal de Frades. With permission to build 2000 square meters within all the phases, this first phase of construction has now started, which includes basic infrastructures (water, electricity and sewage) along with the construction of a multi-functional building, including a large sala for meditation, a kitchen, toilets, showers, storage facilities, and guest rooms, as well as four huts for the bhikkhus.

All the people connected with the monastery are joyful when they see the progress in the development of the project. These changes to the new property will certainly be very beneficial, since it will offer more conducive conditions to practice and train in the lineage of Ajahn Chah, in Portugal, bringing blessings to all.

This is a long-term project that demands a lasting commitment from the Sangha and lay Buddhist friends. It is also an encouraging sign that the Buddha’s teachings are spreading in the West in the 21st Century.

In Peace and Harmony